September 11 and Other Historical Dates

Most people can remember where they were and what they were doing when traumatic events happen.

I was in my living room, watching a rerun of L.A. Law, with my sleeping puppy, Echo, on my lap. The program was interrupted by breaking news and I watched in shock as the second plane crashed into the tower. Our house renovator, John, came into the living room, took one look at the tv, and this man who never swore in front of me used some colourful language. I called my mother and told her to turn on the tv.

I was in front of my gym locker, getting dressed after a Phys Ed class. A rumour started about President Kennedy being shot. I didn't believe it, until it was confirmed in my next class, Geography. Our teacher told us to go home.

I was on Twitter when I noticed the news about Queen Elizabeth II's death. Although we knew that Queen Elizabeth was getting old and frail, she seemed as if she would just go on forever. Her death last Thursday is the end of an era and an historic moment. She's joined Prince Phillip. Rest in peace, Your Majesty. 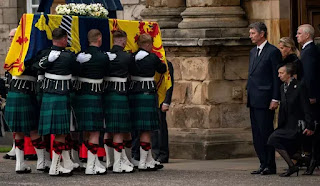 Posted by Barbara Etlin at 5:51 PM