My husband, M, and I are getting ready for the 2012 Erma Bombeck Writers' Workshop in April.

1. Help M sort through his original humour files to find the funniest jokes for his standup comedy gig.

2. Be his audience while he rehearses.

3. Time his routine. We don't know how long his routine will be this year, so that's a problem. We're assuming it's the same as in 2010, three minutes.

4. Learn how to use the video camera component of my Blackberry to record his comic genius.

Today he turns 11, but he still believes he's a puppy! 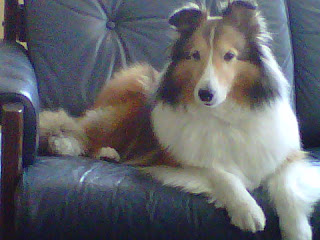 Dance with your leash, Echo! Your birthday present will arrive next week.

Some interesting links found here and there in the blogosphere: Kelly Barson, author of the upcoming YA novel, 45 Pounds, is featured on the Friday The Thirteeners blog today. Kelly is also a member of my critique group, the Feathered Pens.

She reveals her most embarrassing moment! It's okay, Kelly, we won't tell anyone...


The inspiring story of how Kathryn Stockett, author of the bestselling novel, The Help (which was made into an Academy-Award-nominated movie), was rejected by 60 agents. Her 61st query letter netted her an agent, and her agent sold her novel and the film rights soon after.


A story that I read, probably in "Writer's Digest" years ago, or perhaps in King's memoir, On Writing, that still inspires me when I need a morale boost: Stephen King, after hundreds of rejections, sold his novel, Carrie, to Doubleday. He answered the phone call from the editor on his neighbour's phone because he was too poor to have his own phone line. After signing the contract, the editor wanted to know whether King had any other novels to show him. King replied, "What about those other 17 novels you rejected?"*
* a rough paraphrase of what I remember reading.

Finally, a story about Margaret Atwood, which I may have read in The Red Shoes: Margaret Atwood Starting Out, a biography about her, or perhaps it was in "Writer's Digest." Atwood decided to self-publish her first book of poetry, The Circle Game, which went on to win The Governor General's Award. Later she received a phone call from Jack McClelland of McClelland & Stewart, at that time Canada's largest book publisher. He asked her whether she had written any novels for his consideration. She said something like, "What about that novel I sent you two years ago that never received a reply?"* *again, a paraphrase McClelland dug her manuscript of The Edible Woman out of the slush pile on the floor, read it, and published it, to much acclaim. It became a best seller and was the start of her astonishing career as a literary novelist.


Have a good day and happy writing!
Posted by Barbara Etlin at 4:52 PM No comments:

When Mercury's in retrograde
it always foils me. It will raid
creativity and cause cascade
of brain. And all the plans I've made
to write will go askew. I wade

My fancy new mouse doesn't roar
and I don't know what good it's for
(It sure won't move the cursor.)
I feel as though I'm slogging through
a prehistoric swamp of gore.
(I notice that my rhymes become
progressively worser.)

Though Skype is free I'd gladly trade
for working speakers that don't fade
when Mercury's in retrograde.